Sherman author Stephanie Spinner is a master of her craft in the world of children’s literature. Yet, if you ask her how many books she has written, she’ll probably just say, “a lot.” For the record, the number is 35, ranging from picture books, easy-to-read books, chapter books, to middle-grade and young adult novels. They’ve received starred reviews and prestigious state awards, and they’ve been offered by many book clubs, including Scholastic and the Junior Library Guild. They’ve been published in eight foreign countries, including China and Japan.

Stephanie’s fans are young readers of all ages, from kindergarten through high school, who are intrigued by biography, Greek mythology, history, science fiction, and animal intelligence. She engages kids by writing at their level and is known for having a distinctively underwritten style.

Her latest book is “Who is Pope Francis?” a biography in the Who Is / Who Was? series that’s scheduled for publication in 2017. “He’s a very interesting person who’s shaking things up a lot, and doing good, at least in my opinion,” she says of the Pope. Her other books for the series are, “Who is Steven Spielberg?,” “Who was Annie Oakley?,” “Who was Clara Barton,?” and “Who was Sitting Bull?” Because they’re all people she admires, researching the books was a pleasure.

Stephanie is currently working on a book set in ancient Troy, before the Trojan War. She isn’t sure yet if it’s for pre-teens or teens. Her other Greek mythology books for young adults, “Quiver” and “Quicksilver,” received many awards, recognitions, and great reviews. “Monster in the Maze: The Story of Minotaur” and “Snake Hair: The Story of Medusa” are easy to read books, and they also reflect her love of the Greek myths. 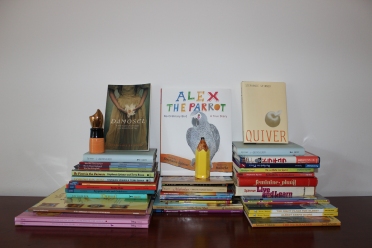 When asked what some of her all-time favorite books are and why, Stephanie says she’s especially fond of her most recent young adult novel “Damosel.” (“And not only because it took me two years to write,” she jokes.) Based on Arthurian legend, it’s narrated by the Lady of the Lake, a reclusive water spirit with magical powers. Though she’s often portrayed in the legends as a peripheral character, in “Damosel” the Lady is central. Her intimate view of what’s going on in Camelot makes her a fascinating narrator.

Stephanie is also fond of her book, “Alex the Parrot: No Ordinary Bird – A True Story,” about an African Grey parrot whose intelligence (and extreme bossiness) made him an international celebrity. Stephanie says she was in seventh heaven while researching the book, “because I was free to read any book about animal behavior that I could find, and it’s a subject that has intrigued me for years.”

Another book about an animal that’s close to Stephanie’s heart is “Paddywack,” an easy-to-read story. “It’s about a little girl called Jane and her extremely bratty pony,” she says. “Jane has to figure out how to negotiate with him, and it’s not easy. The way they come to an agreement has some funny moments. It’s a fantasy, of course, but negotiating with pets is definitely a reality, at least in my experience.”

Aside from being an acclaimed children’s book writer for over three decades, Stephanie has many long years of editorial experience in children’s publishing, and has held executive positions at both Random House and HarperCollins Publishers.

Writing for children was a natural career progression for her. As an editor at Random House, it was part of her job to write books about licensed characters like the Muppets.  “I never envisioned being a writer,” she says. “Random House required me to write and I learned on the job. It was great.”

In 1980, one of Stephanie’s first books for Random House, now in its 33rd printing, was an easy-to-read retelling of Bram Stoker’s “Dracula.” “It was a crash course in how to write for kids,” she says. “‘Dracula’ is a 450-page Victorian novel written in very dense 19th century prose, with many characters and plotlines. I had to simplify it so an 8 to 10-year-old kid could understand it. That really taught me a lot about getting to the essence of things, which is often what children’s books do. They say things simply and clearly so they can be understood.”

In 1986 Stephanie came up with a new concept for a series of children’s books for Random House. “They would look more grown up than the easy-to-read books, but wouldn’t be as hard to read as middle grade books,” she says. She then collaborated with her “playwright and sci-fi friend,” Jonathan Etra on a zany chapter book entitled “Aliens for Breakfast.” It received great reviews and won the Texas Bluebonnet Award. “After that I joked that the book made me a celebrity–at least to 8-year-old boys.”

She and Jonathan had so much fun writing together that they couldn’t resist co-authoring a second book, “Aliens for Lunch.” Sadly, Jonathan died of heart disease in 1987. She went on to complete the trilogy with “Aliens for Dinner,” which is dedicated to him.

Some years later Stephanie collaborated with her friend Terry Bisson, a renowned science fiction writer who has won both the Hugo and Nebula awards. Their two “goofy” books, “Be First in the Universe” and “Expiration Date: Never” were published in 2000 and 2002.

With over five decades of writing, publishing, and editorial experience, Stephanie has seen some major changes in the children’s book industry. When she was an editor, she would buy a manuscript if she liked it, with no questions asked. Today, she says, that almost never happens–the norm is for publishing decisions to be made by committee. “I was lucky enough to work with some great editors who were known for their wonderful taste and quirkiness,” she reminisced. “They had the ability to find talent and nurture it.”

In those days, she says, children’s book authors almost never went out on tours; now they often do. They’re expected to promote themselves on social media and be telegenic as well. As for book signing events, they’re a must. Stephanie does them periodically. “I love meeting people, especially the kids. When they know my books it’s a huge thrill.”

When asked if she has any advice for parents and educators, she says, “encourage kids to read anything. I read as many comic books as regular books when I was young. I was a voracious reader then, and I still am. For parents, don’t be alarmed if your child is reading comic strips. Just let them read, and their taste will improve.”

When Stephanie isn’t writing, she travels, preferably on horseback. Her equestrian trips to Kenya, Iceland, and Costa Rica were high points, she says, “though walking my neurotic little dog Grendel and growing lots of flowers keep me pretty happy, too.”

Save the Date: Stephanie will be signing her books on “Love Your Library Day” at the Ridgefield Library, October 1st from 11 a.m. to 3 p.m.

Her books are available in print and e-book editions and can be found online at the Penguin Random House, Barnes & Noble, and Amazon websites.

This article by Alicia Sakal first appeared in Town Tribune.