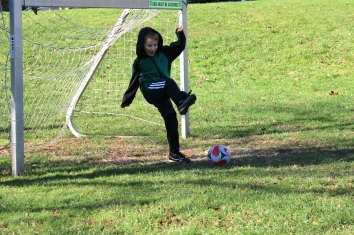 Saturday marked the end of the fall season for the Sherman Soccer Club. Children and parents alike had a fantastic time participating and watching the last game of the year. As a parent, it was simply amazing to see the young In-house players in action working together on their teams looking focused and serious at times, as if they really thought they were professional soccer players.

The awards ceremony and party that followed were also exciting parts of the day. It was a proud moment for the Micros and In-house children because each team player received an achievement award from the coaches. For my 5-year-old son, Kevin, this day was extra special because it marked the completion of his very first season playing In-house soccer. Naturally, like every child, he was grinning from ear-to-ear while walking up to receive the coveted award as Coach Tom called out his name and Coach Craig gave it to him.

Reflecting back on this season, I can see how much my son has grown personally and continues to develop as a team player during the course of just a few months of practices and games. My husband and I have also learned with him while he plays soccer. Oh, what a first season…

Not knowing quite what to expect on the first day of practice, we showed up at the soccer field right before role call Saturday morning in mid-September. Children were having a blast together hanging off the goal nets like “Spider-children” and running around playing in all different directions. Naturally, my son ran full-force towards them to join in on the action.

Needless to say, I had my doubts about how on earth these children were going to ever learn to play the game of soccer together. I also thought that as long as my child gets plenty of fresh air and sunshine, and has fun playing and getting exercise with the other children, then this could be just the right sports program for him.

By midseason, I was pleasantly surprised by how well many of the young players played and progressed through the season’s practices and games. My proud “mommy moment” came when I saw Kevin score his very first goal! Murphy’s Law, I didn’t have my failsafe point-and-shoot camera on me that day to capture the moment. What was even better, Kevin artistically expressed his proud “soccer moment” by drawing with colored pencils the reenactment of his “spectacular” soccer move.

As for getting the soccer rules and terms down, it’s a work in progress. As a family, our knowledge of this sport continues to improve. For example, we now know what center circle, free kick, and match are.  We’re getting there.

By the end of the season, it was inspiring to see the progression and transformation of an entire group of soccer players, and to also see how each child developed and improved his or her own skills. For instance, early on in the season, my son helped kick the opponent’s ball into his own team’s net while being goalie. Now, at the last game of the season, he prevented the opposition team’s ball from getting into the net and scoring a goal while he was goalie. He also used to run in the wrong direction plenty of times, and even helped the other team score goals. Now, he listens better to the coaches and runs in the right direction, well… most of the time, just like the rest of the players “mostly” do.

At the end of the party, my husband personally thanked some of the coaches remaining and told them how impressed he is that, collectively, they get these young soccer players to symphonically work together on well-organized teams.  We are both in awe as to how the coaches even did this in such a short season that only began in mid-September. After all, it’s no easy feat to get children on the Micros and In-house teams to listen, learn, and consistently follow directions.

As for myself, I am impressed with how these kids have fun, and at the same time, look so skilled for their ages playing soccer on the field, well… most of the time. With any minute of downtime, they are goofing off and just having a great time together. It’s also interesting to see firsthand how naturally serious the more seasoned players are when they play soccer, and how some of their “moves” are so well orchestrated for being so young.

When leaving for the day and walking off the soccer field, I asked my son “would you like to play soccer again next season, in the springtime?” “YES, Mommy, P-L-E-A-S-E!” was his enthusiastic reply.   Admittedly, I must say, there’s also something really neat about being a newbie “soccer mom” or a newbie “soccer dad”, and it’s enjoyable to get involved as a family with the other soccer children and their families, too.

Now, we just have to get through the winter, as we are already looking forward to another fun season out on the soccer field. We can’t wait for the spring season to begin!

This article and photo by Alicia Sakal originally appeared in the November 19th Edition of the Citizen News, a locally printed newspaper for Sherman and New Fairfield, Connecticut. It’s part of the Blue Skies and Sunny Days series and can be found under Sports – Youth Soccer.